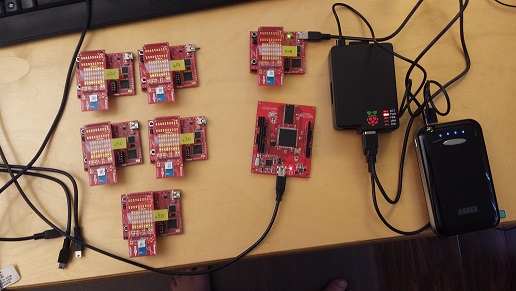 This is the source code used to evaluate the TI CC110L Chipset. The objective of this evaluation was to determine the maximum distance the signal could propagate using the lowest data rate, at the max transmit power. In addition, this testbed was used to explore simple protocol(s) to implement guaranteed wireless communication packet system. This project implements the following features:

This testbed has the following components:

The Energia IDE was used to compile and program the MSP430 LaunchPad using the CC110L Energia Library. I made some slight changes to the original CC110L library to increase transmit power and to lower the data rate to improve link performance. The CC110L has been provided in the Github repository.

Overview of the Wireless Protocol

The wireless protocol uses acknowledgments, therefore the hapTriggerSensor will attempt to re-transmit the packet several times if an acknowledgement packet was not received. This will evaluate the link performance when operating at the edge of service. The hapSimpleHub sends status information through the serial port when a received packet has been demodulated without errors. A simple Python script communicates to the hapTiggerSensor through the serial port. The Python script could be hosted on a Windows PC, but for this experiment a Raspberry PI was used as the host computer.